How To Avoid Getting Rust on Your Shower Door 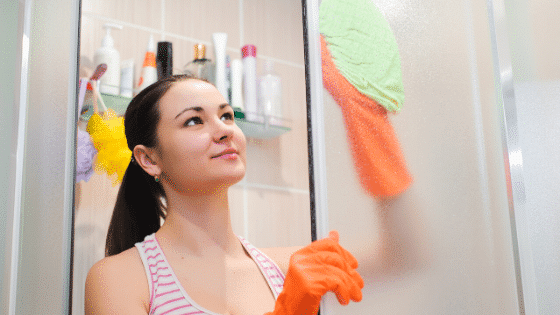 Glass shower doors reign superior to shower curtains, which are archaic and flimsy in comparison. They allow light to enter the shower stall, making the bathroom look brighter. Best of all, they’re great if you have shower tiles you want to show off.

Unfortunately, the only downside to these doors is they’re prone to getting rusty. Keep on reading to find out how you can make your shower doors look good as new.

If you’ve had the same shower door for years, it’s probably coated in rust. Rusting can usually be found on the door’s metal rollers. When this happens, it makes the rollers challenging to move. Don’t panic! You should expect Rusted shower doors because of exposure to moisture.

Though finding rust is typical, don’t let it get out of hand. Some people are under the impression that rust is metal discoloration, which is false. Excessive rust weakens your metal and poses a safety hazard to your family.

When oxidation wears metal down, it isn’t able to support the weight. Your shower door’s rollers will be at risk of breaking, which will result in your door breaking. A falling glass shower door can break into thousands of pieces, and you’ll have to avoid stepping on sharp glass for weeks.

Worst of all, too much rust can encourage the growth of a bacteria called tetanus. Tetanus will affect your nervous system, leading to excruciating muscle contractions. Another name for tetanus is lockjaw because it’ll leave your jaw and neck muscles in pain. Moreover, it’ll interfere with your ability to breathe. There’s no cure for it, and if it worsens, it can result in death.

It’s imperative to treat rust as soon as you notice it growing. You can reduce its growth by regularly cleaning your shower doors.

Fortunately, there are many ways to remove rust from your shower doors. One way to remove it is by rubbing alcohol over the stains using a cotton pad. Rinse it off once you’re done. If that doesn’t work, you can try a non-abrasive cleanser. Put a small amount on a wet sponge and scrub the rust off. You can also mix salt and lemon juice and use it as a cleanser.

Another method is to create a paste by mixing baking soda and water. Leave the paste on the rust for about 20 minutes, then rinse it off. Not only is this an effective way to treat rust, but it’ll also get rid of soap scum.

Once you remove the rust from your shower door, you’ll need to take preventative measures, so it doesn’t come back. Remember, water build-up leads to rust, so wipe down your door with a towel soaked in a cleanser after each shower.

Although the occasional rusted shower door is typical, maybe it’s a sign you need an upgrade. Give your bathroom a facelift and treat it to a new, elegant glass shower door. New Concepts Glass Design specializes in custom glass shower doors. We’ll work with your budget, so contact us today.