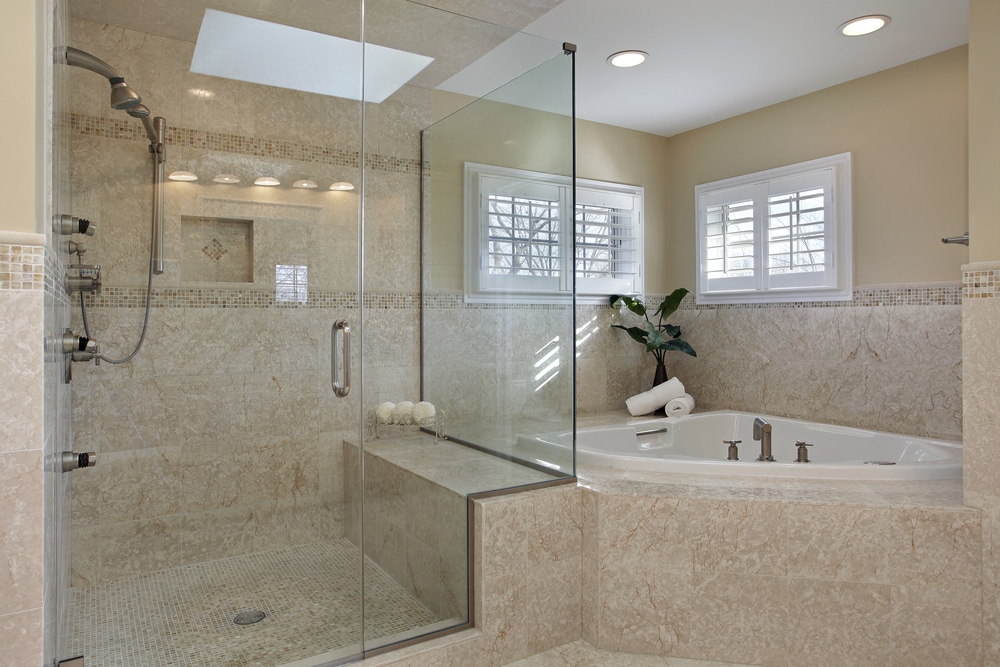 Glass enclosures and European shower doors are an important part of the newest trends in master bathroom design.

The separate tub and shower configuration that has dominated bathroom design for three decades is finally falling by the wayside. Homeowners are ditching their bathtubs and instead choosing to install oversized luxury spa showers.

2016 Is the Year to Ditch the Bathtub

From coast to coast, homeowners are renovating the master bath to eliminate the tub.

It allows for a double- or triple-sized shower to go in its place, or as an alternative, it allows the homeowner to add additional storage space or a sitting area in the master bath. It also creates a feeling of openness and light in the bath, especially when using a clear glass shower enclosure.

Finally, removing the tub makes the home more attractive to future buyers and increases its value.

New developments in plumbing fixtures have made the realistic spa experience accessible at home.

Sauna systems are another popular feature in the new-and-improved master shower.

Glass enclosures are an important part of this trend. Today’s spa showers involve highly detailed tile work and high-end glass and metallic tile. European shower doors allow the beauty of the tile and accents to shine through.

And because glass shower enclosures easily can be made watertight, they’re the perfect foil for multiple spray and steam jets.

The spa shower is also taking a trip outdoors this year.

Architects, in response to high demand from their clients, have begun adding an atrium or outdoor component to the master bath. By situating some portion of the shower enclosure in a courtyard or open-air area, homeowners can enjoy the natural light and views right from their own shower.

Again, glass enclosures and shower surrounds are an important part of this trend.

European glass shower doors and enclosures, with no hardware to break up the view, provide a feeling of truly being outside.

In some cases, designers configure the shower such that glass shower doors open into a lushly landscaped courtyard. This allows the homeowner to throw open the doors when the weather is favorable, and enjoy the fresh air along with the natural light.

For the first time in many years, the boring master bath is getting an energizing update. Even if a full renovation is not in the budget, homeowners are upgrading certain features to mimic these dramatic trends.

In many cases, simply replacing a standard shower curtain or sliding door with European shower doors is enough to create this contemporary, updated feeling. It’s safe to say that the glue holding together these new spa-inspired bathroom trends is the clear, European-style glass enclosures.